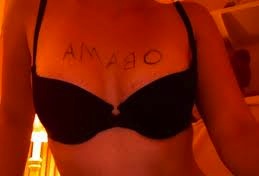 I think it’s fairly apparent that we’re in an incredibly sorry situation here in America.  A situation that the American voter has supported.  Stupendous governmental expansion, spending that soars above and beyond any sane reason or logic, absurd debt… the answer? Well, isn’t it obvious?  MORE spending! Increase the debt ceiling.

Americans DID elect the “representatives” who’ve delivered us into the comedic adventure we’re on.  I think the term is “masochism”.  It’s apparent that we’ve moved well beyond the point at which we can look at this as stupid, mistaken philosophy and the like.  What we’re seeing now is the intentional destruction of the old American form of freedom and independence.  Obumasorass isn’t stupid, well..  actually he obviously is, but that is not why he’s done what he’s done.  He’s just workin’ for the Massa and things are gettin’ done!

A majority of Americans claim to want him gone, but who will replace him?  Another Sorosatard New international Order Socialist?  A Demonrat liberal forwarding an even more liberal dose of governmental control and international co-dependency?  A Republicrat conservative forwarding a more liberal dose of governmental control, absurd drug “wars”, more behavioral guidelines?  Where is freedom and responsibility in all of this?

As bad as things are, we came a lot of the way here in a Republicrat wheelbarrow.  While they did tend to provide a much more business and success friendly environment than the Demonrats, they borrowed and spent like madmen, increased the national debt and watched as we dug ourselves deeper and deeper into the chasm in which we now find ourselves.  The current administration is Hell bent on digging us in even deeper and the Republicrats are gettin’ in line as well.

The answer?  Glad you asked. It starts with defeating Obumasorass no matter what.  At this point ANY vote for ANYbody other than the GOP choice, whoever that turns out to be, will not be a wasted vote, it will be a vote for Obumasorass.  Once we get rid of Obumasorass we can work on either refurbishing the G.O.P. or replacing it.  I’ve grown rather fond of the Tea Party movement.  My own religion is following the Freedom and Independence God forwarded by the founding fathers.  Anything that reduces governmental control in any way.  Anything that moves toward putting power into the hands of those interested in success, freedom and advancement, rather than into the hands of people invested in “equality” and “fairness” to whom “excellence” is a derogatory term and the ideal Olympics will be the Olympics in which EVERY participant gets a gold medal.

Countless lives have been laid down to deliver the opportunity for freedom which we do indeed still enjoy.  The price paid for the opportunity we are pissing away is beyond comprehension.  Shame on you America!

Oh, and always remember, Gun Control=People Control.  When a politician wants to control guns, you know immediately what the target really is, not guns…  It’s you!