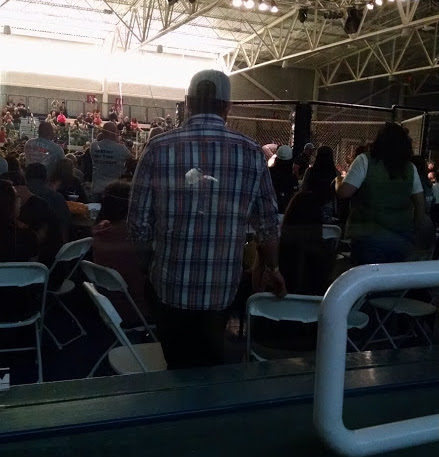 OK, pretty unique evening Saturday night (April 9, 2016). Mason & Bacon decided to go to the Clash MMA 17 at the Ellen Eccles Ice arena in North Logan, UT. I’ve never attended such a thing in the past and thus had no idea what to expect. Twas an evening of surprises! The first was the size of the crowd. We arrived 20 minutes before start time and the parking lot was practically full. The next surprise was security (over the top in my ever unhumble opinion). They were patting people down and searching their packs. I wasn’t allowed in because of my Swiss Army tool (???). Back to the car to dispose of my weapon…

We return, are allowed in, but when we enter the stands, it turns out there is no handicapped accommodation whatsoever (I was minus a leg, a sense of balance, and was in my wheelchair). We end up seated at floor level, in the aisle through which people enter and exit the stands. I shall have to guard my precious Macbook Air with my life!

During the first segment of the event our view is mostly blocked but we are able to see some of what is going on. Security people materialize before me. No, it’s not me they’re after, thank goodness. Evidently they’re tracking a young lady who might have, of all the damnable things, alcohol… but maybe not.

Ok, security gone, first round is over and now a couple of nice looking young ladies are positioning themselves in my line of vision. If they’d take their shirts off and turn around, that’d be cool, but I rather suspect that’ll not happen. Ah, the fight’s on again. One big guy apparently banged the other’s head against one of the support beams of the cage. He’s back on his feet now. Holy smoke, I’m actually seeing some action! I must admit this is cooler when you can see it. Ah, new lady moves in to block my view. At least she has a nice ass. Round 3 coming up. One feller has a boring strategy. Grab the other guy, push him over backwards and then sit on him. Oh, fight’s over. hmm… Next time I’m gonna study up so I know what the hell the rules are ’n such…

OK next fight between deeieiidkals KKSOoeeeaaaaaa! and whoever. Pretty poor acoustics. This looks more interesting. Much better. They ended up on the floor, but there were some pretty impressive moves… Whoa! knockout! excellent fight! Groovy. That was more like it..

Next fight… eventually… reminds me of Mexican slasher derbies. A lot of time is wasted between matches. One of the sponsors is BLO BLO BLEEP!! A guy in the ring is talking about t-shirts… global blu blah t-shirt. bleed blah blah blah, t-shirt!

Girl fight coming up! Well hoopie guadaloopie this ought to be interesting.

Well… It WOULD be interesting, I suppose, if I could see it. Shit, it must be awesome, the crowd’s going completely abstract batshit crazy. Standing up, on their chairs. So it’s become a matter of looking at people’s backsides, listening to incomprehensible audio, and people screaming… I don’t see a damn thing. I’ve no idea what happened but GlaAABMLEEE BLAABLAAAHALLLAAA won. She’s talking, “bleebleem a boodllldi BLES BLAH BLAN and gooblesloboo” ‘er something like that.

Next we move on to title bouts. The crowd relaxes and sits down, thus I finally get to see some action! A title fight next. The girls are done fighting so everyone’s sitting down.

Holy shit, fight’s already over. I saw it and still don’t know what happened.

Next, a welter weight title fight: Nino Genoa 3/0 / Michael Garcia 5/1: Plainly these two are on a different level than what we’ve seen so far. They are both in very good physical condition (even though they’re not ladies), and appear to be significantly more skilled than what we’ve seen so far. Round 4 coming up. Fight’s over. I’m not sure what happened. Looked like Garcia kicked Genoa in the leg… Maybe that’s against the rules… I don’t know. Anyway, it’s over and Garcia is declared the winner.

Next is a professional bout between Miles Welp??? vs Devin Knight???

Fight’s over, one of ‘em whooped the shit out of the other of ‘em. Miles Welp??? got the other feller in a choke hold and he tapped out.

OK… All in all, this has been a well spent evening. I’ve learned a few important things: First, purchase VIP seating; 2- Don’t bring your Swiss army tool (nor whiskey flasks); 3- arrive early so I can score a seat as close to ringside as possible; 4- bring a better camera. In the mean time, study the sport so that I know what the hell is going on.

Alrighty then… Apparently, I’m a fan!