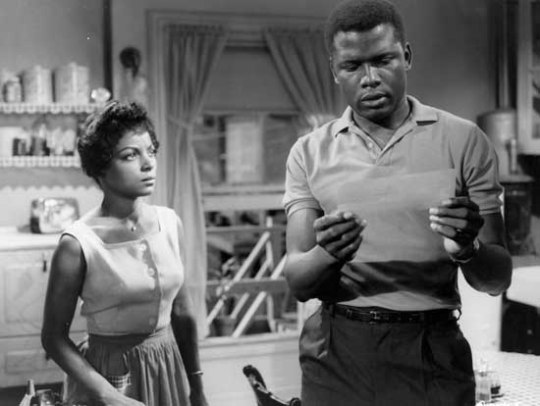 Often interpreted as a statement on racism, Lorraine Hansberry’s A Raisin in the Sun actually delivers a broad presentation of human nature, of which racism can be one possible aspect. Hansberry paints individual images of the stubborn inflexibility in the nature of her characters which is also central to the human condition in general, and is rarely overcome. Hansberry’s characters exemplify the human determination to justify and support one’s own behavior based on individual beliefs and interpretations of the world.

The beliefs and dreams seen here vary from that of Lena Younger’s (“Mama”), maternal, spiritual, house with a yard, and the anchor of family. Her daughter, Beneatha Younger, dreams of independence and rebels against her mother’s traditions, favoring a much more progressive, atheistic philosophy. Beneatha dreams of herself as a youthful adventurer who’ll one day be off to Africa, the land of her roots. In her brother Walter Younger, lies the very typical view of the masculine mastery of ones own destiny, a dream for which he is willing to risk everything. One of the play’s main antagonists, Karl Lindner, feels a loyalty to his neighbors, who happen to be, as is he, not black, like the Youngers, but white. The dreams and beliefs are as desperate and true to those who hold them as are the witchdoctor’s beads to the Bechuana. While the reader is not brought to an actual resolution, Hansberry delivers a series of very telling lessons on the individuality which burns within them all. The core differences and the challenge of overcoming them shines brightly from her stage.

Mama is driven by traditional beliefs, the strength and love of family and spirituality. At the core of Mama’s dream resides her God. Yet from her daughter Beneatha we hear, “It’s all a matter of ideas, and God is just one idea I don’t accept… I don’t believe in God… I get so tired of him getting all the credit for all the things the human race achieves through its own stubborn effort. There simply is not God! There is only Man, and it’s he who makes miracles!” (51)

This statement earns Beneatha an enthusiastic slap in the face from Mama. A slap which invokes from Beneatha not a change, rather a softly spoken, “…everybody thinks it’s alright for Mama to be a tyrant. But all the tyranny in the world will never put a God in the heavens” (52). Two closely linked people who absolutely love one another yet hold diametrically opposed beliefs as to the ultimate source of truth: for Mama it’s God, for Beneatha it’s man, for each it is equally the truth.

Racism, as obnoxious yet powerful a persuasion as has ever been devised, is demonstrated by one of the victims of that very conviction, Walter Younger, who utters to his wife, Ruth, as a result of his disappointment in seeing his own immediate dream of liquor store ownership slipping away, “Cause we all tied up in a race of people that don’t know how to do nothing but moan, pray and have babies” (87). Walter has obviously heard the white supremacist doctrine and here regurgitates it at his own black and pregnant wife. He sounds like a Kleagle for the Klan. But he’s really lashing out at his newly obvious lack of the mastery of his own family.

Karl Lindner is also sets up a justification of his own behavior when tells the Youngers, “…most of the trouble exist because people just don’t sit down and talk to each other. That we don’t try hard enough in this world to understand the other fellow’s problem. The other guy’s point of view” (116). He then makes this justification by pointing out that he’s actually looking for the younger’s best interest in suggesting a segregational alternative for them moving into a white neighborhood: “Negro families are happier when they live in their own communities” (118). Obviously Lindner is a racist, but does he know that? Does Lindner believe he can fool the Youngers? No, he is really fooling himself, “I sure hope you people know what you’re getting into” (149). Racism? Egocentrism? Benevolence? Has Lindner a dream? Certainly, yet his belief conceals the very lack of reason upon which it is grounded, and conceals it from himself.

Hansberry also shows the reader the possibility of conversion after the exchange during which Walter, as his son, Travis watches his father turn down Lindner’s offer. Mama, referring to Walter’s radical change of attitude says, “He finally come into his manhood today, didn’t he? Kind of like a rainbow after the rain…” (151). Mama believes that Walter has finally seen the light that she’s been aware of all along. The reader is not told whether it will last, but the possibility is certainly evident.

A Raisin in the Sun is the perfect example of a section of Hansberry’s work referred to by Olga Barrios in The intellectual Spear where she says Hansberry’s “concern with the human being went far beyond any barriers of color, race or culture” (Barrios 28). Hansberry has given us a portrayal of significantly varied beliefs, dreams, and behaviors and the logic used to justify them, to themselves and one another. Ultimately the tale ends up with no winners, no losers, no resolution, nor clear cut image of what the future holds. Yet Hansberry shows very clearly, human nature with its often irrational magnificence, portrayed in a light the typical audience might not have imagined, but Lorraine Hansberry did, and portrays it vividly.

5 thoughts on “A Raisin in the Shade of Human Nature”